TDCJ's resident newspaper, The ECHO, had the opportunity to interview former resident Garrett Stanley, who tells a wonderful story of success in life after incarceration. His story documents hard work, motivation and a desire to do well in life. 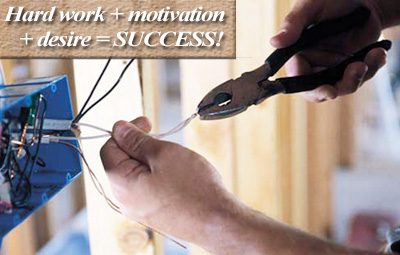 ECHO: Describe your life before prison.

GS: I did time in the Texas Youth Commission (TYC) from the ages of 14 to 16. I received my GED there at TYC. By the time I was 17 years old I was into drinking and drugs and in TDCJ on a 17-year sentence.

I attended and completed the electrical trades classes offered by the Windham School District (WSD). I was able to work for the unit maintenance department as an electrician for four years where I obtained invaluable experience on a day-to-day basis at work. I also volunteered and worked as a teacher's aide in the electrical trades classes for one and one-half years.

ECHO: Do you have any special comments about the WSD instructors you had for the courses?

GS: They were all great. They showed patience and kindness. They were very helpful. They taught us even when some of us were unteachable.

ECHO: Describe your life after release in 2006.

GS: At that time, I was assisted by Project RIO. I bought tools. I saw an advertisement in the newspaper, place by an electrical union. I answered the ad. They gave me a skills evaluation test and I scored very well due to the WSD classes and my experience at the Luther Unit. I have now been working for the same contractor for seven years.

GS: I am a journey man electrician working at commercial and industrial sites, including power plants and water treatment plants.

ECHO: Explain how you think WSD made an impact on your life after TDCJ.

GS: I now have a good job and a good career due to the classes and skills learned through the WSD Electrical Trades program. I give all the credit to WSD such that I can make an honest living. I am a citizen of society, pay taxes and no one can take these things from me.

ECHO: What would be your advice to current residents?

GS: Educate yourself for your future. Take advantage of every avenue of education available for you. Be hungry for knowledge. Dedicate your time toward an education and skills that can provide a career once released.

Reprinted from The ECHO.

Other Success Stories that may interest you:

NEW - After more than 16 years - "I graduated from the electrical program in 1998. I found my Windham teachers were real people, and they..."

Education changed my life - "These opportunities [GED® classes or learning a trade] are great, but WSD is so much more than that; for me it was a change of life."

Inspiration Success Story - "You are inspiring people you haven’t even met!"

NEW - They didn’t give up - "It makes me feel really good to know that these guys aren’t giving up just because they’re in prison."

Welding Success Story - "I'm thankful for the welding program I was allowed to take while locked up".