"Life is serious. Freedom is serious. Employment after incarceration is serious. Education is the thread that will enable residents to tie all of this together," said former Texas Department of Criminal Justice (TDCJ) resident Nate Williamson. 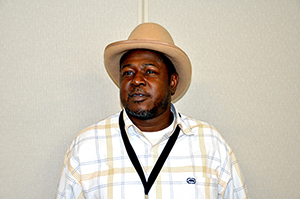 Williamson should know. Having been released for seven years, he stands as proof that success following incarceration is not only a possibility, but a reality as well. As a former resident who has discovered the path to self-improvement, Williamson understands the significance of an education and, more importantly, how deeply it is bound to a resident’s future.

"The education programs that are offered through Windham School District (WSD) can really make a difference in a resident’s life after release," Williamson said, referring to his six and a half years at Dawson State Jail, the Powledge Unit and Mineral Wells Pre-Release units.

After dropping out of high school his senior year, Williamson floundered with no aim or goal. He said he spent years working odd jobs, apprenticing as a plumber’s assistant, and working as a fork lift operator, warehouse worker, carpenter and auto mechanic. However, a reckless, negative lifestyle tempted him, and incarceration caught up with him. He said he required several tough lessons behind walls and iron bars to understand reality.

"I was running wild back in those days. I made so many terrible choices that hurt so many people. It wasn’t until I was incarcerated that I realized the value of education and how integral it is to a resident’s return to society," he said.

However, once those lessons were learned, Williamson embarked on a journey to self-improvement.

"WSD has a great environment for setting goals and it is definitely in residents’ best interests to take advantage of all the educational opportunities available," he said.
Williamson expanded his skill base by taking multiple vocational trades through WSD. According to Williamson, this was the key to his success.

"By taking full advantage of all the classes that were available to me at WSD, I gained a stronger footing in this fast-paced world," he said.

He received certificates in fields such as plumbing, carpentry, electrical and dry wall application. He is presently employed at a Waco-based transportation company, where he has worked for the past five years.

"My duties consist of employee recruitment, employee training and dispatching," Williamson said. He said he has been awarded four promotions while working at the transportation company. He also works as a private contractor, using skills he learned in the WSD vocational classes.

Williamson’s story is remarkable to say the least. Having a positive future outlook, he said, is essential to reaching a successful future.

"Residents need to learn as much as possible while they are incarcerated. By taking advantage of education through WSD, they can change their life for the better. Education and vocational trades will definitely open doors that would otherwise remain closed."

Many skills that Williamson learned at school while incarcerated were easily transferable to every day usage, he said.

"The things I learned through Windham were not just right out of textbooks — because I picked up so many other useful tools, like patience, good work ethics and the importance of punctuality."

According to Williamson, a resident cannot overlook the importance of presenting oneself appropriately to a potential employer, and WSD can assist residents in that area.

"The classes also taught me social skills important to getting and keeping a job. I learned how to present myself and interview well — the handshake, eye contact, and being honest and forthright," he said.

Odds are against former residents when they are released from prison, and social and economic forces are significant deterrents for residents to accomplish goals. Yet Williamson proves tough odds are surmountable.

"Self-improvement is a diverse, dynamic and distinctive experience — it is a reality that can be achieved through WSD," he said.

Williamson also praised WSD instructors who impacted his life: "They treated me like a human being and made learning exciting and worthwhile. I thank them so much for what they all taught me."

This story reprinted courtesy of The ECHO, TDCJ’s newspaper by and for residents.