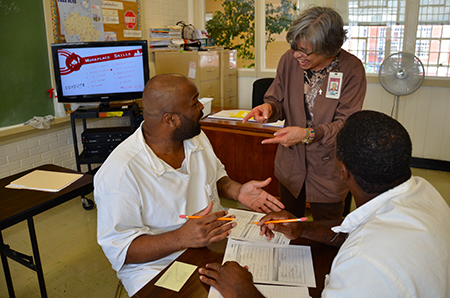 "While involving some of our current students, we were striving to help additional residents become employable," said Travis Henderson of WSD's Operational Support Department, who assisted with implementation of the new initiative. "With TDCJ's support, we provided new services to even more residents in July. This was the first time many of these men and women were able to participate with WSD and experience academic success. They were learning important reentry skills, building self-esteem and preparing for future employment."

To develop appropriate courses for a correctional environment, the WSD partnered with Texas-based Acceleron Learning, producing an educational video series.

"Acceleron specializes in the development of video lectures and planning tools for practical life skills," Henderson said. "The WSD series was customized for incarcerated students. Its development included a series of WSD student interviews and pilot lessons on Windham campuses." 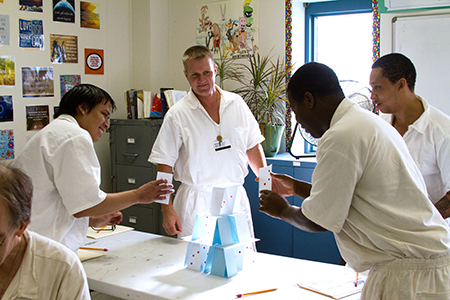 Residents enrolled in summer school at the Holliday Unit work in teams to resolve challenges in a class project. Three weeks of summer school programs created additional opportunities for thousands of residents to learn more skills leading to successful reentry and employment after release.

"There was tremendous response to these offerings," Henderson said. "Enrollment was requested by individuals who want to be better parents, employees and members of society. "Teachers and students involved with summer school have also reported very positive experiences."

"Summer school this year was absolutely fabulous!" said Shelli Carter, Beto Unit Cognitive Intervention instructor and summer school teacher for financial and workplace skills. "Students loved summer school and asked if these courses could be offered at different intervals during the year. They were taking notes, asking questions and trying to see how these skills would work in their own lives. I've never seen such intense student involvement. Acceleron did an exceptional job of creating lessons and materials that are meaningful to our students' lives." 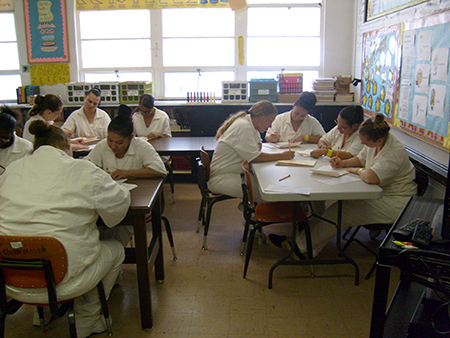 "I learned that I need to be more active and productive in employment," Jackson said. "I know now how to fill out job applications, start my own small business and get credits and student aid for classes. This knowledge will help me financially because I will be able to get a job. It also helps me a lot emotionally. I have confidence now that when I get out, I can get a job and stay out of prison. I have forgotten so much after being locked up for 21 years. The information I got -- I really needed. It put me back on the right path.

"Everyone in the class was paying attention and participating," he said. "They gave us lots of good information. Guys are still talking about the classes at the trusty camp."

Henderson said residents successfully completing a summer school course received a certificate of completion which may be used to demonstrate reentry preparations to the Texas Board of Pardons and Paroles.

"WSD Superintendent Dr. Clint Carpenter and I recently reviewed summer school course offerings with the Texas Board of Pardons and Paroles," he said. "We wanted to make sure they have an awareness of the program and an understanding of training provided to students. The board also had a positive response to our first summer school."

Carpenter said he was pleased with the opportunity to implement new educational services.

Dr. Clint Carpenter and (right) Travis Henderson of WSD describe the benefits of Windham’s summer school program to the Texas Board of Pardons and Paroles

"We appreciate the guidance of the Texas Legislature in creating WSD's summer school initiative," he said. "We also appreciate the solid support of the TDCJ Correctional Institutions Division; the diligent work of the WSD employees who promoted the program, prepared the coursework, taught the classes and supported the initiative in countless ways, and of course, the enthusiastic participation of students who made the classes a success each day. Together we are building pathways to brighter futures for these students and their families. WSD looks forward to evaluating, improving and offering summer school again in the future." 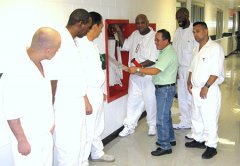 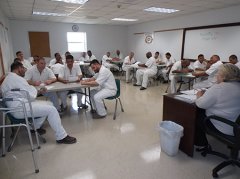 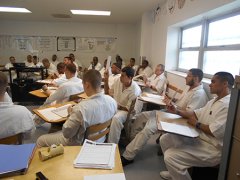 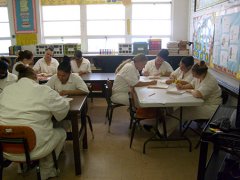 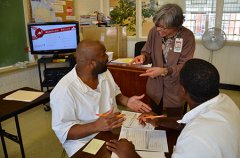 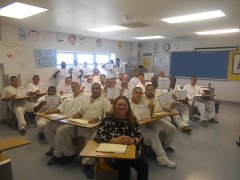