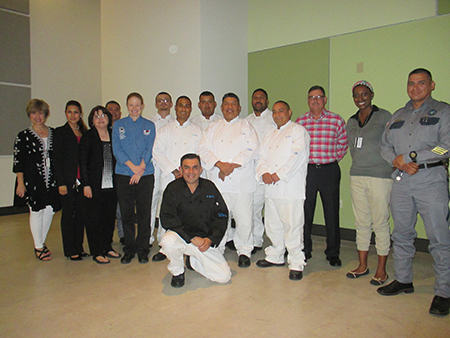 Community service, great cooking and second chances for better lives are on the menu at the San Antonio Food Bank (SAFB). Thanks to the food bank's partnership with the culinary arts classes of Windham School District (WSD) and the Texas Department of Criminal Justice (TDCJ), fortunate WSD students are experiencing a taste of volunteerism, accomplishment and success through this workforce training program.

A Community Kitchen Graduation to honor residents who completed the SAFB's Texas Second Chance Culinary Program was held earlier this year. The food bank hosted the event, which included residents from the Dominguez State Jail. This 18-week program trains residents in the culinary arts and uses the skills they are developing to help feed the hungry of San Antonio and surrounding areas. More than 58,000 meals are prepared by the food bank and volunteers during an average week, so the graduation theme was giving back to society. Several motivational speakers highlighted the ceremony and luncheon, which also honored a graduate from SAFB's 71st community culinary training class, another program supportive of workforce training.

Community service was the highlight of remarks of Eric Cooper, 15-year president/CEO of the SAFB. He said the giving spirit of the food bank dates back to San Antonio's missions, which allied with surrounding farms and gardens to bring faith, hope and food to communities. He compared an ongoing SAFB alliance with local missions to the recent community service of the graduates.

"We could not be more excited for today's graduates!" he said. "I want you to ponder why you are here. Not only did you finish this program -- you also helped feed 58,000 people a week. We could not have done that without you."

Second chances and community service were also emphasized by Charlie Biedenharn, owner of Bakery Lorrain in San Antonio, a family business that has served the city for generations.

"I was thrilled to be asked to speak to you, especially since I have been in similar shoes," Biedenharn said. "I've never been a part of TDCJ, but I found myself in my late teens and early 20s in very similar institutions – struggling to stay out of trouble with the law, and in some instances, struggling to stay alive. I struggled with substance abuse for a long time," he said. "Fortunately, someone gave me a chance. I was able to get the tools necessary to get my life back on track. A spiritual component and the altruistic aspect of service work helped me.

"It is wonderful to see a group of people in our community receive a second chance. Even though there may be speed bumps ahead, do not be discouraged by them; stay on the path."

For the first time….WSD Valedictorian V. Lopez said the Texas Second Chance Culinary Arts Program gave him his first opportunity for real community service.  He expressed appreciation for the opportunity to participate in the program, and he encouraged everyone to experience the benefits of being a volunteer.

Class Valedictorian V. Lopez, an resident at the Dominguez State Jail, said the SAFB gave him his first experience with volunteerism. The 45-year-old father and grandfather said he was grateful that WSD, TDCJ and SAFB created the Texas Second Chance program for residents.

"Volunteering is one thing I had never really done in my life," he said. "This program is the place where we are able to give back to the local community and do something positive for society and also for ourselves. That's the greatest benefit of the program," he said. "I now believe in our ability to give back to the community. We can become better human beings, husbands, father and grandfathers -- whatever we need to be. Not too many people want to hire former residents, which is understandable, but there are a lot of good people out there who do give us second chances."

"This program helps us heal. It teaches us that every person makes a difference. Without it, there would be people and children who otherwise wouldn't be able to eat. I am very grateful for all everyone does to make sure those families and children have meals."

Lopez was looking forward to his release from TDCJ this summer and being reunited with his family. He planned to return to work as a mechanic in the oil field, but he was also looking forward to cooking at home for his grandchildren. He urged others to experience volunteerism.

"I encourage everyone to volunteer," he said. "You will feel great about yourself and you will want to do it again."

The highlight of the culinary arts commencement was the awarding of white chef jackets to graduates by Cooper and SAFB Chief Development Officer Michael Guerra. In this special presentation, outstanding WSD student E. Guillen was honored with a coveted black jacket.

"It is traditional that if a student chef goes far and above the rest of the class in service, leadership, paying attention, and learning well, he or she will be recognized with a jacket of a different color," Guerra said, with Guillen accepting his honor. 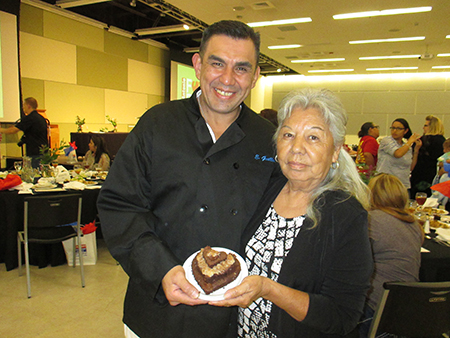 A special celebration:  After receiving a black chef’s jacket for outstanding work in the Second Chance Culinary Arts Program, graduate E. Guillen honors his mother on her birthday with a beautiful cake.  Families attend Windham graduation ceremonies because their support is critical in helping residents obtain valuable training and skills, celebrate success, and experience successful reentry into society after release.

In another special moment, the audience serenaded Guillen's mother, who celebrated her birthday by attending her son's commencement. While all guests were served cake for dessert, Guillen's mother was honored by receiving a small heart-shaped cake baked by her son.

"The San Antonio Food Bank will continue to be an advocate for employers to support you and others like you," Cooper told the graduates. "I read a statistic that said every dollar we spend in training and education within the confines of TDCJ would save $5 on the outside. We have invested in you, so take that investment and invest in your community and in your family. We are so pleased with you guys!"

"That opportunity to serve, to give to, to become selfless, to make a difference – let that be a part of your life forevermore," he said. "Let us always be mindful of where you have been. Your family members, your community and your neighbors encourage you to put your past behind you and your future in front you! Embrace that future with energy and hope; take those opportunities and never squander them."

Editor's Note: The SAFB also coordinates with WSD to provide a warehouse training program for residents from the Dominguez State Jail, and works with TDCJ residents from the Torres Unit to provide additional culinary arts education. The immense and ongoing support of the SAFB is greatly appreciated by its partners, students and communities statewide.