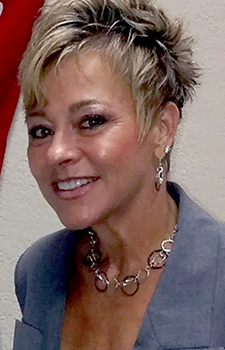 Harryman was a childhood drug abuser, in and out of Texas jails and the Texas Department of Criminal Justice (TDCJ) until age 34. She became discouraged, considering herself a loser, a failed mother and a potential suicide victim. A teacher she met through Windham School District (WSD) in prison was the first person to help her feel differently. Today she is energetic and optimistic, enjoying creative work, relationships with her children, opportunities to encourage others, and her favorite role: grandmother. Yet "getting here from there" was not easy. She was born in Houston and was only three when her father died of a heroin overdose – around the same time she was first exposed to drugs.

"I was introduced to marijuana at two and a half years old, and at four and five, I was rolling and smoking it," she recalls. "I was taking it to school with me in second and third grade, and my mother was addicted to heroin, too."

Harryman and her brother moved around, "shifted from family member to family member, living in an environment of heroin addiction and alcoholism," she says. "There was no stable home life and no staying in the same school for any length of time. I was ridiculed by teachers and classmates, and I felt stupid. I tried so hard to learn and really wanted to be successful, but I just couldn't get it."

Harryman dropped out of school with a seventh grade education and became a mother at 16, still engaging in marijuana use.

"After my second child was born at 17, I started drinking," she recalls. "My alcoholism kicked in, and I was introduced to cocaine at 19. I was instantly hooked."

That same year she was incarcerated for delivery of cocaine. Throughout the next 15 years, she would spend time in various facilities, including a TDCJ Substance Abuse Felony Punishment Facility. She found herself enrolled in a WSD literacy class in TDCJ, where she was urged to earn her GED.

"Windham didn't ask me if I wanted to get a GED," she says. "If you don't have a GED or diploma, you have to be put in school in TDCJ. I don't think I would have got it if that wouldn't have happened. I was a straight-F student, and I didn't think I could even learn anything. I had a teacher who wouldn't give up, I finally earned that GED, and I began to believe I was not stupid."

"I was in a vicious cycle of addiction and incarceration until I committed to Alcoholics Anonymous," she says. "I had gotten out of prison and jail a couple of times, planning to be successful, but I would take that first drink and spiral downwards. I'd quickly find myself back behind bars. I was scared and suicidal and did not see a way out.

"It was very, very difficult to get a good job after prison, so I considered starting a business. Of course, I knew nothing about life, making a change, being self-supportive or staying out of prison," she says. "I did know that AA, staying sober and taking care of my family were priorities. I joined AA, becoming sober in 2000. After that, I just kept putting one foot in front of the other, with a whole lot of faith, and slowly started my own business in 2002: Artcrete Designs.

"Artcrete is a decorative concrete business in Austin providing services to homeowners, homebuilders and commercial project contractors. We create and treat concrete floors, countertops, fireplaces, driveways, and pool decks with an artistic approach. We provide beauty and unique flooring solutions to customers in surrounding areas. Overall, this has been a huge learning curve for me. It's messy, difficult work, but I enjoy being able to provide good service to people."

Harryman works with project crews of four or five employees, including adult son Dylan. Growing up with a young mother struggling with addiction and incarceration, Dylan also had to overcome his own substance abuse and criminal background.

"Dylan is in his fifth year of sobriety now, and he also earned his GED from WSD," Harryman says. "I was proud to be able to attend his graduation. He, too, has had challenges and had to make changes. Dylan and I have the opportunity to inspire others, so we spend time speaking to people dealing with addiction or incarceration. Their question is usually ‘How do you get from there to here?' I tell people it's all about the power of God, faith, and the steps I took. I had to first learn that I could do anything and my actions had to change.

"I am also no longer hiding behind the fact that I dropped out and did not have a high school education. I'm no longer limited. Instead, I'm blessed with work and family. I can even help provide financially, emotionally and mentally for my grandchildren. This means everything!

"It's been hard, but I've grown this business into a highly-respected part of our community," Harryman says. "People trust me, handing me the keys to their homes and businesses. I've earned their trust, and I've learned my own value."