Outstanding media representatives are honored annually by The Windham School District through participation in the Texas Association of School Board (TASB)'s Media Honor Roll initiative.

The Media Honor Roll recognizes reporters statewide for fair, accurate, and balanced reporting of news about public schools. Criteria for the district selection included the media representative's efforts to get to know the superintendent, board president, and the district's mission and goals; report school news in a fair, accurate, and balanced manner; give a high profile to positive news about schools; visit the schools; and maintain a policy of no surprises by sharing information with school officials. Media representatives from more than 420 Texas newspapers, radio and television stations, and online publications were named to the 2015-16 Media Honor Roll by all participating school districts.

WSD's Board of Trustees participates in the Windham-supported recognition during its meetings in Austin, and WSD nominated five media representatives for the most recent recognition. Three of the honorees attended the meeting with family and friends, giving WSD and its trustees opportunities to say thank you for a job well done. 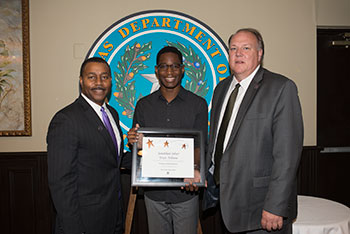 During the meeting, Board Chairman Dale Wainwright invited three attending Media Honor Roll recipients to the podium to thank them for "providing quality public service to the State of Texas." Honorees included: Evan Folan from KVIA-TV 7 in El Paso, Johnathan Silver from the Texas Tribune in Austin, and Nicole Wilcox Schupe from the Navasota Examiner. WSD Superintendent Dr. Clint Carpenter told the Board these journalists traveled to WSD schools to interview, film and photograph teachers and students during classes. Their resulting reports featured Windham efforts to motivate students to obtain job skills and educational tools – and transform their lives.

"This was positive, accurate news about WSD, appearing in newspapers, on television, and social media," Carpenter said. "Our honorees gave the public a chance to see the unique world of correctional education inside the walls of the Texas Department of Criminal Justice." 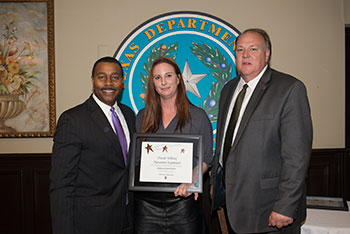 Reporter Nicole Wilcox Schupe of the Navasota Examiner visited the Luther Unit for a first-hand look at Windham.

Reporter Nicole Wilcox Schupe of the Navasota Examiner visited the Luther Unit for a first-hand look at Windham. She attended literacy, vocational and life skills classes to present an overview of WSD programs. Her back-to-school story showed educational achievements taking place each day within TDCJ facilities in Navasota, as well as across the state.

The Texas Tribune featured a well-written front page story about WSD Excellence in Teaching winner Jody Addy. Reporter Johnathan Silver brought photographer Neil Cooper to the Robertson Unit in Abilene to spend a day with Addy and her literacy class in the Computer Assisted Instruction lab. The visitors saw an innovative technology-integrated lesson and interviewed staff and students. They produced an impressive feature about the challenges of teaching in TDCJ and offered insights into the reasons educators join WSD. 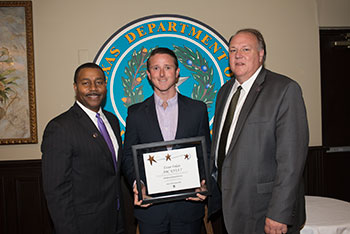 "WSD appreciates the time, effort and talent of these journalists, resulting in balanced, informed reporting. We also thank TDCJ for helping facilitate these media visits," Carpenter said. "We are proud to join the TASB in honoring outstanding Texas media."