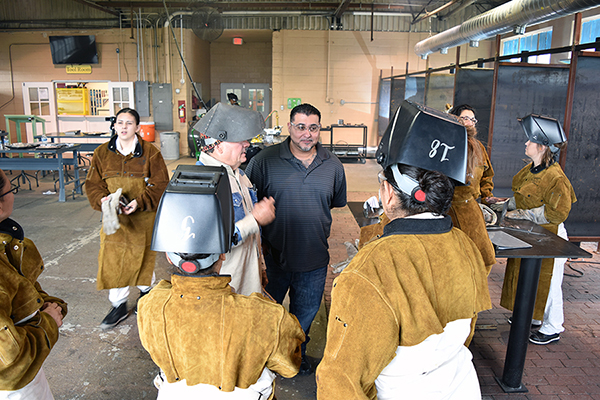 Released from Texas Department of Criminal Justice (TDCJ) supervision in 2013, Davila used self-discipline, hard work and aggressive welding training to rise professionally while also caring for his family. He recently took time from his demanding job schedule and volunteered to travel to visit several Windham welding programs, instructing and encouraging students. Davila was accompanied by his mentor and previous WSD welding instructor, Jimmy Perry. The two spent time with teachers and students on projects and discussed employment needs and preparation. 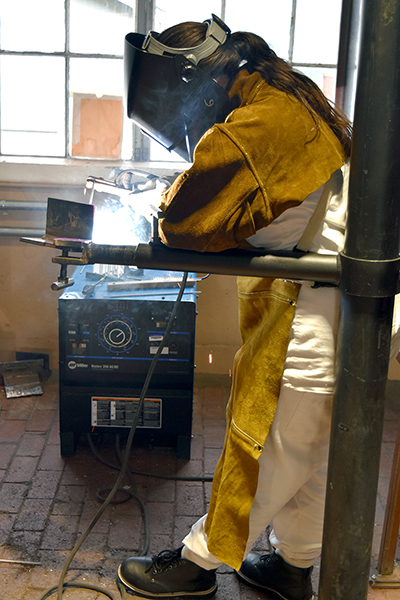 In the new women's welding class, Murray Unit students are transported daily to the Hilltop Unit welding shop. Geared up in protective jackets and helmets, students work in multiple welding booths, surrounded by the clamor and clang of metalwork, the aroma of hot flux and acetylene, and the roar of electric grinders. They receive hands-on instruction from WSD teacher Blake Saunders, who will not let them fail in their attempt to acquire an employable skill.

Davila encouraged students to prepare for the rewards of a welding career but warned them of upcoming challenges. Because of his own experience, he understood the demands placed on welding students.

"When I first took Mr. Perry's class, I sometimes thought he was being mean and rude. He was making us do safety sheets and all this other stuff we didn't think was necessary. I quickly found out that all those were things I ended up doing in the industry."

The budding welders halted their normal class activities and sat attentively as Davila told them what to expect in the industry, the importance of soft skills, and the rewards of promptness. When he first began working for Patriot Erectors, Davila said he would show up 30 minutes early every day.

"I would sit outside until one of the managers would show up. He'd open the gate, and I would drive in behind him.

One day, the manager asked if I would like to learn how to turn on the gas and open up the shop. So I started doing that, too."

His consistency was noticed by management, and opportunity soon arrived for Davila. After months of coming to work early, a scheduling conflict caused both managers to be absent simultaneously. Having built a reputation for punctuality and reliability, Davila was asked to open the shop in their absence, which ultimately led to his promotion from shop-welder to supervisor.

"I honestly believe that if you're on time, you're already late," Davila said.

One important thing Davila stressed to the 21 women present was not to oversell oneself in a job interview.

"Don't come in and say you're a welder when you're not. A lot of guys have come in and oversold themselves, but when the rubber meets the road, we found out what they were claiming wasn't necessarily true," Davila said. "If it takes you coming in and being a janitor just to get your foot in the door, do that and work your way up the job ladder. We're focused on the people at Patriot. We're about giving people a chance."

Davila told the group about a man who started as a custodian. Determined to become a welder, he stayed late every day for four months until he could pass a break test, a process in which two plates are welded together, cut into "coupons" for testing and bent by a hydraulic bending jig. The man was soon certified by an inspector and now works for Patriot Erectors as a welder.

"The point is, when you guys come to these interviews, you have to be as honest as possible. Welding and fabrication jobs are not the only positions available. There are other positions. There are parts positions, saw positions, and plasma positions. Even janitors start off at $14 an hour." 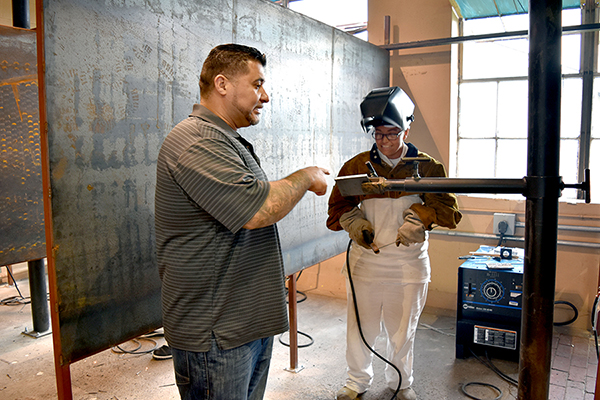 Patriot Erectors is a welding and fabrication company located in Central Texas. It is a "felon-friendly" business that prides itself on timeliness and quality, and Davila described the company's growth and development. He said that at one point in time, due to a large workload, Patriot was forced to contract work out to companies. Eventually, Patriot recovered and now owns the company to which it was contracting its extra work. He said Patriot Erectors bought another business in Dallas and is looking to expand to Seattle and Hawaii.

Patriot Erectors hires former residents, and Davila said this is because many of these men and women are hungry to reintegrate into society upon release and willing to do extra duty. He said former residents are often the ones to stay extra hours do what is required to get a job accomplished. 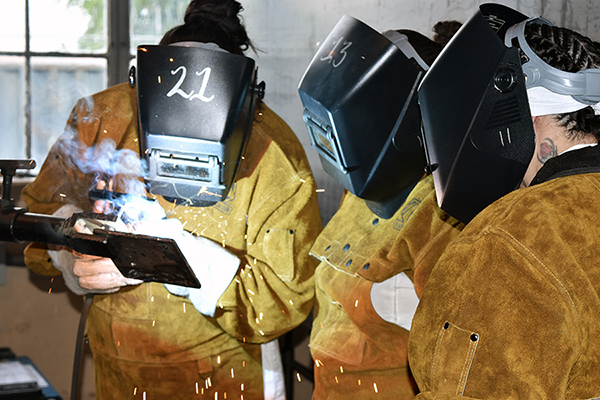 "As an employee, when you find that right group of core guys who are going to run your shop, manage the hours, and make sure the quality is there, you'll find that these are the people who are going to make revenue for your business," he said.

Davila also acknowledged the potential instability of a company's willingness to allow felons to work for them.

"We former residents want to keep a good rapport with our owners because we want to keep the door open for the next person," he said.

Patriot Erectors, Davila added, is flexible and willing to work with parolees who may have conflicting schedules due to programs, meetings or aftercare that may be required by Parole.

Davila said he came to the Hilltop Unit to prove to the women welders that it is possible to have a felony and be successful, but it also takes determination, focus and true grit to be successful in the industrial field, whether one has a clean record or a lengthy rap sheet.

"Most people have never had to go through the difficulties we face in prison, so after their 11 hours, they're ready to clock out. After everybody was gone, there would be three or four of us left in the shop," Davila said. "As successful people, I don't think we go home when we're tired. We go home when the job's done." 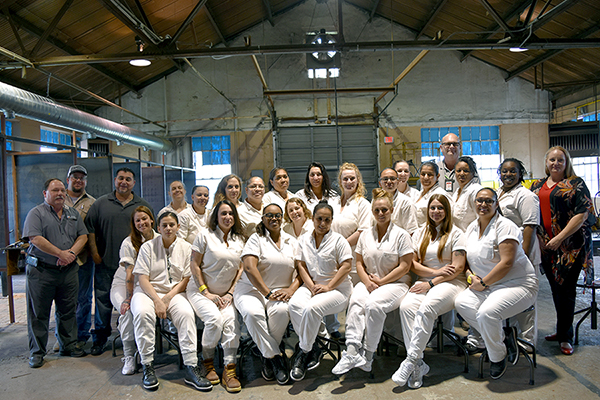