Locked up as teenagers and serving about 20 years each for murder charges, Candelario Davila and Jose Sanchez are unlikely success stories.  They were destined to years of solitary time in the Texas Department of Criminal Justice's Administrative Segregation, lacking motivation, mentors and job skills.  However, a correctional educator they describe as "father figure" and "the greatest welder ever" provided the intervention needed to transform their lives. Today they are gainfully employed as welders in the Austin area, enjoying their families, freedom and work. 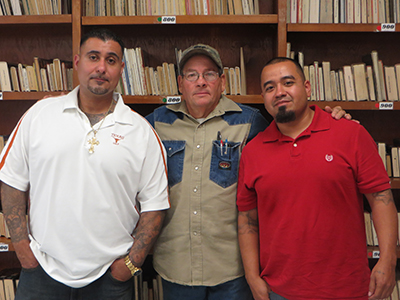 Davila picked up a murder charge when he was 15 and was certified as an adult.  He spent eight years in Administrative Segregation, emerging as a more mature young man in his 20s and realizing he needed to get involved with a job trade to be able to make a living after release from prison.

"I knew nothing about welding, but I took a trade through Windham School District (WSD) with veteran welding instructor Jimmy Perry," he says.  "My dad is a welder, so I knew about the trade, but I had no idea that I would like it. From the day I struck my first arc, it was game over!  I knew this was the trade that would lead to a successful career.

"Mr. Perry caught me at the right time of my life when I knew I was going to need training.   He was helpful and willing to go beyond what was required. Like a father figure, he took me in as a new student, but he was hard and tough.  He took me above and beyond Level 1 welding classes. He easily could have given us two welding rods for each position and just left it at that -- giving me my certificate and sending me out the door, but he didn't do that!  Instead, he taught us flat welding, complicated out-of-position welds, and all of the principles of real fieldwork. 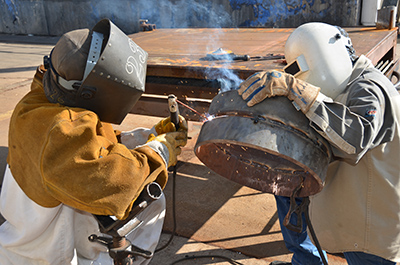 Davila came to work early, applied his training, worked hard, and continuously practiced his craft at home after 12-hour work days.  Before long, he was making the move to Patriot Erectors in Dripping Springs, where the owner was looking for talented welders.

"I know teachers sometimes wonder if what they are doing is making a difference, and my life is proof that Windham teachers are making a huge difference!" he says.   "I had some outstanding teachers in WSD.  In fact, I failed my GED the first time in math by one point, and I was ready to give up. But my literacy teachers mentored and hammered me, and by the time I took the next test, I blew it out of the water."

Davila has been out of TDCJ about two years now after learning welding skills and earning his GED through WSD.  At age 37, he is happily married with three children, living and working near Austin.  He serves as shop foreman for Patriot Erectors, which offers steel fabrication and erection services to a large number of clients in Central Texas.  These include Samsung, Austin's F-1 Racetrack, and the Henry B. Gonzales Convention Center in San Antonio.

"As shop foreman, I have guys working under me and I move the jobs along.  We make sure that they are welding, fabricating and meeting deadlines," Davila explains.  "We make sure that the welds are being done, and we also make sure we are not going over our job hours and losing the company's money. I've been at Patriot for a little over a year. I am certified to work on stainless steel, to stick weld up to 4g, and to do flux core up to 4g.

"I have also been able to speak to some of Mr. Perry's classes and help guys who have the same mentality I had or who may be leaving the class to find a job.   I tell them, 'You've got to stay hungry! You've got to be willing to work in the rain and the heat and the sun. Be willing to work on your days off; take the hard way. It is difficult, but to persevere, you've got to keep things in perspective.'  I have also been able to help a few guys get jobs here, too, as my boss looks for good welders."

Davila was able to put in a good word at Patriot Erectors for fellow welding student Jose Sanchez, who entered TDCJ at age 16, also on a murder charge.  During his incarceration, he also found himself in Perry's welding class.

"Like Davila, I was locked up young," Sanchez says.  "I went to prison at age 16 for murder, and I did close to 19 years on the sentence.  At the beginning of my sentence, I was getting in a lot of trouble, so I spent a whole lot of time in Ad. Seg.  It wasn't until I got to the C.T. Terrell Unit that I figured I needed a trade before I went home. Some people get into these trades not knowing what they're getting themselves into; that was me.

"A lot of the fabricating work that I do is related to blueprints I learned to read in Mr. Perry's class.  Mr. Perry is a really good teacher and a role model to a lot of men.

A lot of residents don't want to learn, but our Windham teachers don't give up," Sanchez says.  "My life is proof that we can learn and be successful and stay out of trouble.  We now have real jobs to fall back on.  What we have learned in Windham keeps us out of trouble and focused on success.

In 2011 Sanchez was graduated from Mr. Perry's welding class, but he still had more than three years of prison time left to serve. He had earned his GED from Windham, and he took the Cognitive Intervention and CHANGES life skills classes, which helped change his outlook.

"My teachers taught me skills to get my mind right before I got out.  I try to keep my determination to succeed and my life goals in the front of my mind," he says.  "Candelaria Davila helped me get this job," Sanchez says, "and I work hard to make it successful. Patriot Erectors is teaching me to do welding the ways they need and want.  They let me get practice and have trained me to fabricate.  I'm gaining a lot of great experience.  The work can be stressful, but just knowing I can do a good job is enjoyable. I think I'll be welding for quite a while."

Jimmy Perry still teaches welding at the Terrell Unit, where his students show respect for their teacher and take pride in state-of-the-art training he offers. Perry is always happy to share the success stories of students who are released.

"It's good to see Davila and Sanchez moving forward," he says. "I had the chance to visit Patriot Erectors, and they have about four of my former students working there now. It was good to get to know the employers there and see that they are very, very supportive.  They have even been willing to provide us with materials to work with in our classes, and we greatly appreciate their support.  They are helping us give these men a second chance, and we enjoy working together to make a positive difference in the future."