"It was a great opportunity for me to have been a part of this career expo. I learned that being incarcerated doesn't mean my future has to stop there," said resident M. Garcia, a recent participant in a Terrell Unit Career Exposition hosted by Windham School District.

Residents gathered to hear from a variety of employees and professionals speaking about industry jobs and work opportunities for post- release residents. With more than 160 students in attendance at five one-hour long sessions, there were many men eager to hear what visitors had to say. Ten volunteers and community leaders from five different companies came into this Texas Department of Criminal Justice facility in Rosharon, Texas, to talk directly to students about employment opportunities. Some of the visitors were more familiar with incarceration than others. 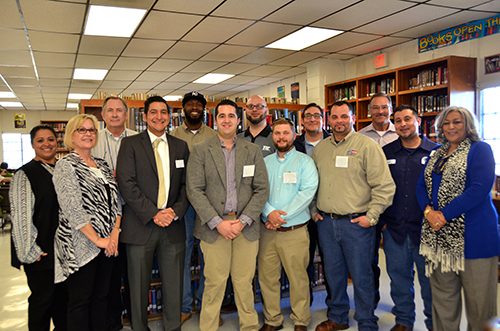 "I'm currently in a management position for my company and I'm a convicted felon," B. Robinson told WSD students. "So, when people tell you that you can't do anything when you get out or that you're unable to change things – that's a lie," he said. Robinson now represents one of the largest industrial contractors in North America.

Robinson shared his straight-forward personal story with residents to let them know there are opportunities to better themselves after incarceration and maintain employment. He said that his company hires former residents who demonstrate strong training, hard work and real effort.

Another volunteer speaker, R. White, also described a past that residents could relate to -- being incarcerated in his earlier years. He said he vividly remembers a specific day during his incarceration, when he felt his "boots hit the ground" and recognized he needed to make something of himself after release.

"If you want success, it's there. There's no one who can get in the way of it except for you," White said. "Work ethic, dependability and your ability to be an example to everybody around you are the main keys to success. You have to want it."

White now works for a welding company near Austin. He said he is proud of the work he is doing to provide for himself and his family. He also said living a clean life was made possible by determination discovered during incarceration.

Many presenters emphasized the effort that must go into gaining different job-ready skills during incarceration, and in turn, into making a positive change after release. Along with industrial employers, speakers included Texas Workforce Solution and the Texas Board of Pardons and Parole. Each speaker shared specific hiring and work preparation details about their businesses, organizations and services. Participating residents voiced optimistic responses to the employment information.

Resident F. Hughen said hearing the advice from each volunteer "was the most inspirational experience yet within these walls."

Resident L. Allen said, "It's mind-blowing and inspirational to know you can have a better future after prison. The possibilities are endless. Thank you, Windham."

Enthusiasm for the event also came from WSD teachers at the Terrell Unit who were excited to see a change in their students' attitudes during the expo.

"It was a big relief for us to organize a career expo in a prison facility for residents who usually spend a lot of time only hearing about difficulties with job placement," said Literacy and Cognitive Intervention teacher S. Falokun. "The expo was the best thing that ever happened to my students. I can now speak with greater confidence that there is hope for residents after release."

Windham Career Expos are being sponsored throughout the state in partnership with the TDCJ and its Reentry and Integration Division. For more information about hosting or participating in a Career Expo, please contact WSD Workforce Specialist Charlene Moriarty at 936-291-5304 (This email address is being protected from spambots. You need JavaScript enabled to view it. ). Career Expo dates include April 29 at the Ney State Jail in Hondo, May 26 at Dominguez State Jail in San Antonio and June 10 at the Torres Unit, also in Hondo. 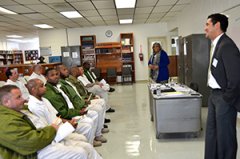 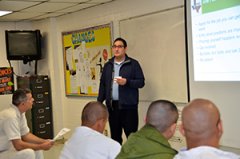 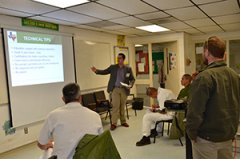 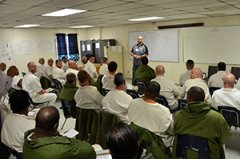 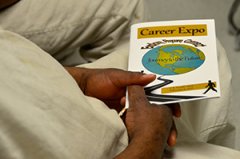 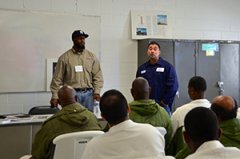